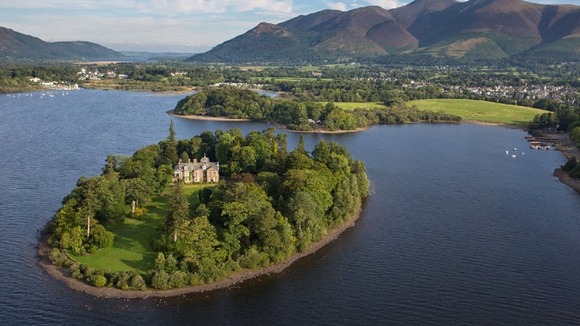 Three miles long and over a mile wide at its widest, Derwent Water is one of the most beautiful of the lakes of the Lakes District. One of the best places to enjoy Derwent Water from is Friars Crag with its stunning views of the lake and the Borrowdale valley. The view was described by Ruskin as one of the three or four most beautiful views in Europe. It is called Friar’s Crag because it is said to be the departure point for monks sailing to St Herbert’s Island on pilgrimmage to where the Saint was said to live. The fictionary Old Brown from Squirrel Nutkin in the Beatrix Potter tale was also supposed to have sailed to the island, known as Owl Island in the book. The Lingholm Woods on the opposite side of Derwentwater were used as a background for many of Beatrix Potter’s woodland and nature sketches.

The largest of the islands on Derwentwater, St Herbert’s is named after the hermit, or anchorite, who lived there in the 7th Century. The remains of his hermit’s “cell” can still be discovered in the undergrowth today. The island is always referred to simply as Herbert’s Island by long time locals.

Close to land, opposite Stable Hills, Lord’s Island was once the home of the Earl of Derwentwater. The ruins of the great house can still be discerned in the undergrowth. Local legend has it that the Countess of Derwentwater fled the house on Derwentwater after the arrest of her husband for his part in the Jacobite rebellion of 1715. The story goes that she was carrying a fortune in jewels which were lost during her mad ascent of a cleft on Walla Crag, giving rise to the name “Lady’s Rake”. Almost certainly completely untrue.

The smallest of the four main islands on Derwentwater, Rampsholme takes its name from the old Norse for the wild garlic that grows in abundance there in the spring. Usually, unless the water levels are very high on the lake, there is a convenient sand and gravel spit extending from the north end of the island that is good for landing small craft.

Derwent Island is the large island opposite the Keswick launch boat landings and is the only inhabited island on Derwentwater. Throughout its history it has been owned by monks and royalty, in the 16th Century it was inhabited by group of German miners when they came to work in the area. They built a camp on the island, grew vegetables, kept animals and even brewed beer.The current house was built by Joseph Pocklington in the 18th century, something of an eccentric; he also built a chapel and a small fort on the island, using the fort for mock battles during annual regattas on the lake. The house is owned by the National Trust and is rented out to private tenants. The house is open to the public on five days per year.

My launching point for sailing the islands of Derwent Water was from Nichol End Marine who kindly offered free use of their facilities. They did however warn me to get there early as parking is a bit of a nightmare! Luckily I heeded their advice and after an early start I managed to bag one of the last parking spaces and wheeled the boat trailer through the melee of parked cars to the foreshore. Launching in to relatively light winds I was thankful that I’d chosen the largest 9 metre sail for Yoda and as I emerged from the shelter of the hills the wind picked up and I was soon speeding across towards Otterbield Island. Passing a group of kids kayaking on and off some rocks that didn’t quite meet my “island definition” I’m soon distracted from my direct route by the stunning boathouses along the shore. Rounding Otterbield is relatively straight forward and the next island, St Herberts Island soon comes in to sight. I take a long wide circuit round the island to enjoy the views to the south and then its round the other side of the island and off in the direction of Rampsholme Island. As I sail by there’s a couple landing their double handed dinghy on the Northern edge of the island where a gravel beach extends from the tree cover. I have a wave of jealousy, but with another lake and islands to sail later in the day I’ve no time for landings!

Sailing towards Friars Crag I spot my support crew Charles taking photos from this great vantage point so I do a quick sail by before heading round the Eastern side of Lord’s Island. It’s pretty shallow and I spend a lot of the time looking down in to the water to avoid rocks and to find a way through. Suddenly I look up and there’s a 6 person SUP in front of me so time for a quick tack away and at last I emerge back in to deeper water. The last island for today is Derwent Isle with its grand house and rows of boat houses. As I turn back towards Friars Crag for the last time I get on the radio to let Charles know he can head back to the launch site. As I’ve got time to kill while he cycles round the lake I start investigating the northern end of the lake and try racing the foiling windsurfer who just isn’t managing to get foiling! Finally I can see my support crew on the shore so it’s time to bid farewell to Derwent Water and head off in search of the islands of Ullswater. They have a lot to live up to after this amazing mornings sail on Derwent Water. The islands have been magical and the backdrop of the fells absolutely stunning.

Yodare Island of the Week No.10 Northey Island – Battles, Birds and Pirate Radio